A swing may be the first playground experience. First, a gentle swing, started by a parent. Later, demands to be pushed higher and higher, then slowly learning to change the moment of intertia in phase with the motion to keep the swing going, swinging higher and higher, experiencing the interchange between feeling heavy and light, over and over again. When swinging is confortable, new challenges enter: Can you twin-swing with a friend - or can you swing faster than your friend? How high can you swing? Is it possible to go all the way around? How far can you jump - and when is the best time to jump?

A swing is an example of a pendulum, familiar to everyone. It provides an abundance of physics examples, and children's questions often enter territories well beyound the curriculum. The experience of the body can be enhanced by visual measurements using simple equipment, that may make more difficult concepts available. Returning to these questions in school helps enforce the notion that physics is not only about equipment in the classroom, but concerns everything around us.

In a mathematical pendulum, forces act on an inanimate, pointlike object. In a swing, the forces act instead on the body that is your own. Close your eyes and recall the feeling. In which direction does the force from the swing act on you? When is this force largest (smallest)? How large (small) does it get? 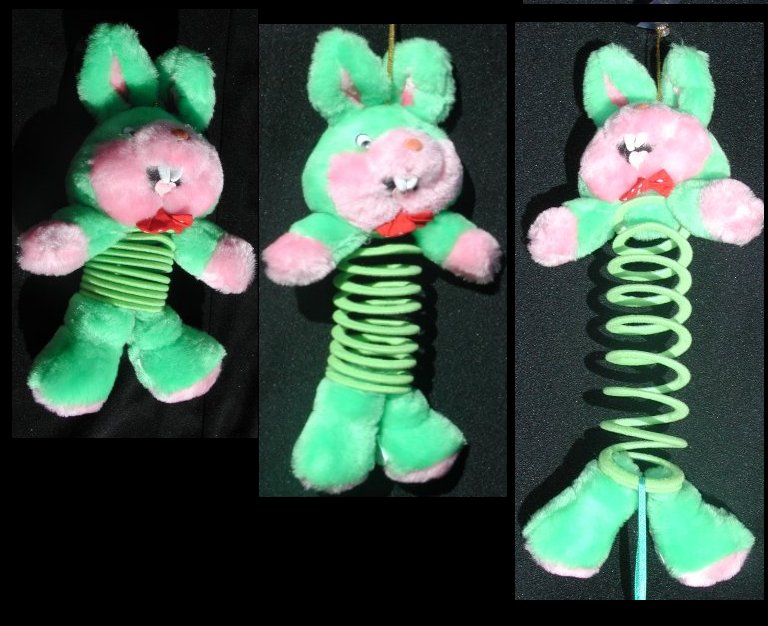 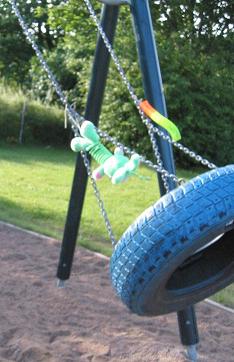 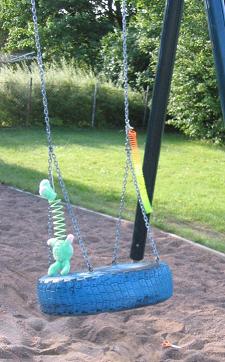 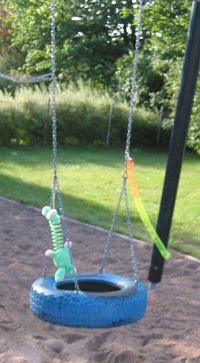 Measuring the experience of the body

The feeling in your stomach tells you that for an accelerated body, forces do not act only in the contact area, but propagate throughout the body, so that a sufficient net force, F=ma, will be exerted on every ounze to provide the required acceleration. The body thus experiences acceleration much in the same way as gravity. The concept "g-force" is useful to describe this experience. Children have heard about the concept, but it is rarely introduced in textbooks, let alone defined. Let us introduce a "normalized force" f=(a-g)/g, which is the force, in addition to gravity, acting on an object, divided by the weight, mg, of the object. For a free fall, this normalized force becomes zero. For an object at rest, the vector f has unit magnitude, and is directed upwards, i.e. in the direction of the force required to counteract the force of gravity. As the swing turns at an angle

, the magnitude of f is g cos

, directed along the chain, towards the point of suspension. As the swing passes the lowest point, the chain must counteract mg, but also provide the centripetal force, m v2/r. For a mathematical pendulum, the acceleration at the lowest point is 2g(1-cos

), independent of the length of the pendulum. The "g-force" then becomes 3-2 cos

The experience of the body can be illustrated by bringing along a small slinky or a spiral toy, as shown in Figures a and b, which gives a real-time visual measurement of the varying forces during a swing. The spirals are shortest at the turning points and most expanded at the bottom.

Student expectations are unlikely to coincide with these observations. Often, the acceleration is subconsciously used in the everyday sense of "increase of speed", or possibly "change of speed". Obviously, the rate of speed change is largest at the turning points and zero at the bottom, where speed has a maximum. The insight that acceleration in physics is the time derivative of velocity, which is a vector, does not come easily to most students, who are likely to have been brought up on an "acceleration diet" consisting of one-dimensional motion, often starting from rest. Still, the more general concept of acceleration is evident throughout the body, and clearly visible in the simple measurements - or in the accelerometer data described below.

Figure c shows a graph from an electronic measurement of g-forces in a playground swing. The probe is a Vernier 1-D accelerometer /1/, held with the arrow in the direction of the chain. The period in the graph is only half the pendulum period, since the swing passes the lowest point twice during a period. The smallest values correspond to cos

is the angle at turning. Similarly, the largest values correspond to gravity plus the centripetal acceleration, giving (3-2 cos

) for a point-like pendulum. (Note that the deviation from unity is twice as large for the maximum g-forces compared to the minimum.)

During the last part of the graph the accelerometer probe was held with the arrow in the direction of motion, resulting in very small values, as discussed below. 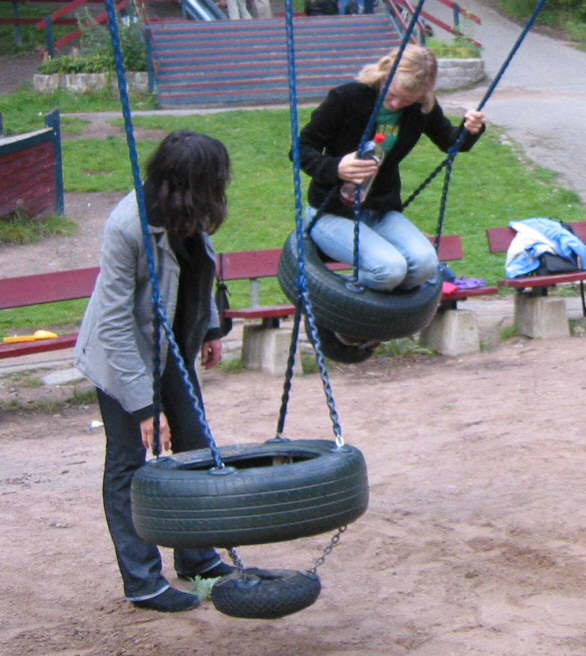 Tangential components of the acceleration

The speed changes in the swing results from the component of the gravitational force along the motion. Still, measuring this component gives very small values, which is quite counter-intuitive. However, since gravity is the only force in the direction of motion, that component of acceleration will be exactly the tangential component of g, resulting in a zero component of a-g as seen in the graph. A one-dimensional accelerometer is thus sufficient to measure the forces on the rider in a swing - but it is important to understand that it is not measuring acceleration, but a component of the g-force. A three-dimensional accelerometer would provide no additional information in this case.

The vanishing tangential component of the g-force for the rider in a swing can also be illustrated by bringing along a bottle with a small amount of coloured liquid at the bottom (Figure d). Students who tried it have asked for water to dilute the liquid, so it would flow more easily during the motion - only to discover that the surface of the liquid does, indeed, remain parallel to the swing. The water level is orthogonal to the plumb line, in this case represented by the chain.

A similar experiment can be performed in an amusement park pendulum ride, bringing along either a small (soft) mug of water (1 cm is sufficient), or a small cuddly animal on a short string. (Safety must always come first!) What do you think will happen? Will the result depend on whether you sit in the middle or in the back? Will you come off the ride complaining that there must be something wrong with your water, since it didn't move?

The period of a swing

The period of a pendulum is remarkably independent of the angle, as noted already by Galileo. This "iso-chronism" forms the basis of a pendulum clock, and it is easy to remember that the second-pendulum (where the half-period is 1 second) is about one metre, giving us an easy way to estimate the period for pendulums of varying length, using the relation for a mathematical pendulum, T=2

(g/L)1/2. The independence of the period on the mass of the pendulum is, of course, a consequence of the equivalence principle. Children can "twin-swing" reasonably well, with an empty swing, or with another child essentially independent of size.

Real-life pendulums often have slightly longer periods, than given by the formula, above. Although large angles leads to longer periods, this rarely accounts for the deviations found by the students, who are also more likely to blame deviations on energy losses. That neither effect has a large influence on the period can be seen in the accelerometer graph (Figure e) from a 42 m long swing hanging from a suspension bridge in the harbour of Göteborg during April 2002 /2/. The length of this swing provides a curious mixture of speed, in the passing of the lowest point, and a very slow pendulum due to the long chains. Swings of similar length can also be found in several amusement parks. The effect of air resistance, proportional to v2 can no longer be neglected for the high speeds in these long swings, resulting in the strong damping, evident from the accelerometer graph, as well as from observation of the swing.

A more important factor affecting the period is the moment of inertia. Although students are not necessarily familiar with this concept, they understand that an object hanging from the center of mass will not swing, or that a counterweight, such as in the ride in Figure f, will result in a longer period. 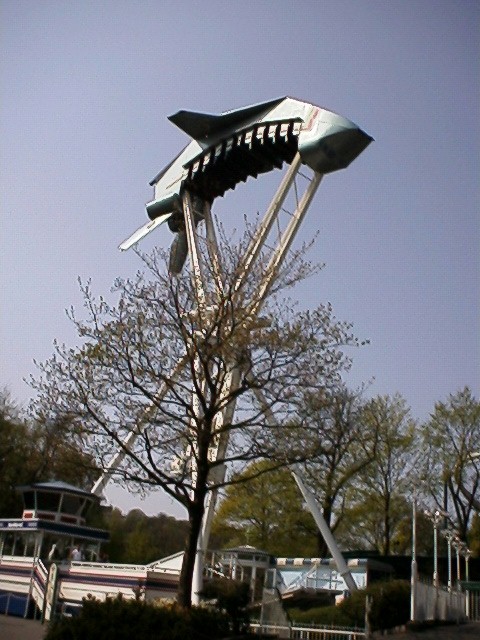 The physics teacher returning to the playground as a parent, pushing children, may reflect on the equivalence principle that allows children to twin swing independent of mass, on the forces acting on children, on angular momentum or energy conservation. The experiments in jumping off the swing at various parts of the ride may be replaced by numerical simulations to find the best angle. A collaboration with the PE teacher can invite projects investigating e.g. the physics of trapeze /4/. Swings come in many varieties, and their physics offer insights in many fundamental principles. Emphasizing the forces acting on the human, accelerated body, shifts the focus from centrifugal to centripetal forces, which may be useful for "cracking the code" that F=ma.